The recent uproar in one of the Southernmost states of India, is the rising agitation of the people, against the Supreme Court’s order of banning one of the oldest bull taming sports mentioned in the ancient Tamil texts, Jallikattu.

Keeping in mind the state of Animal Rights in the country, the current situation fails to give 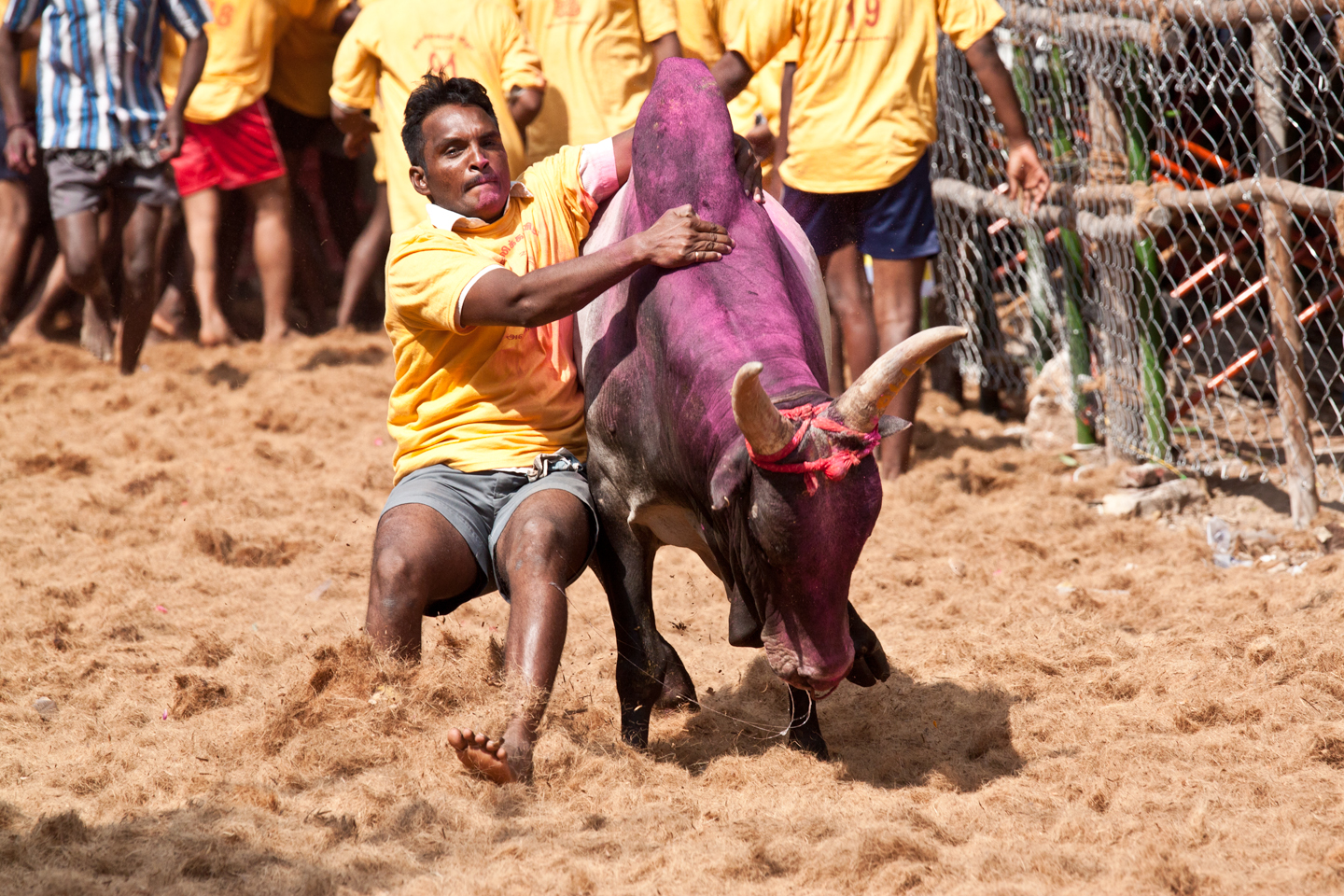 a valid justification for such a sport to be carried out in the name of tradition. This is when individuals are protesting against, on one hand, the ban on consumption of beef, and on the other, the ban on bull taming in the form of Jallikattu.

A look on the history of Jallikattu

Ancient Tamil Sangams described ‘Jallikattu’, as literally ‘bull embracing’. The modern term ‘Jallikattu’ or ‘Sallikattu’ is derived from ‘salli’ (coins) and ‘kattu’ (package), which refers to a prize of coins that are tied to the bull’s horns and that participants attempt to retrieve.

Jallikattu has been into practice ever since the days of the Tamil classical period (400-100BC).  It was common sport among the ancient people, Aayars, who lived in the ‘Mullai’ geographical division of the ancient Tamil country. Later, it became a platform for display of bravery and soon after, prize money was introduced as an incentive to encourage participation.

The current scenario brings us to a situation where a common man, usually from the lower strata of the society, might face a jail time of about 5 years for eating beef in certain parts of the country but playing such a sport in the name of tradition seems justified? How is consumption of an animal in one state and playing of a sport exploiting another in another state a valid public opinion?

The decision given out by the Supreme Court, in this light, was in favour of the animal rights activists who fought to get a ban imposed on the age old practice of bull taming. It considered the practice redundant and against the idea of animal rights.

In the past couple of years, we have witnessed people being lynched because of suspicion of having consumed beef, a sacred animal in the Hindu religion. After numerous debates and deliberations, the law-makers came to the conclusion that a ban was needed to be put upon the consumers of beef in certain states and thus a fine and a punishment was imposed on the people found violating this law. These laws were derived from the idea that the sacred animal should not be hurt in any way, especially because of its religious significance.

A careful analysis of the above two situations brings us to an inference that, in the case of a beef ban, banning of Jallikattu makes sense too, by virtue of being an act of cruelty upon the bulls. Juxtaposition of the two only goes to highlight the fallacy of the framework on which Animal Rights in India are based and public awareness of the same.

Reports have stated that there have been instances where the bulls have been made to drink alcohol, and red chilies have been rubbed into their eyes to disorient them, all in the name of an age-old tradition whose purpose most participants are not even aware of.

If cruelty upon any living being brings about a stringent punishment then how is the playing of this sport any different?

The only plausible explanation as to why the lawmakers of the state are keeping out is because of the direct effect they might have on their vote banks. With the upcoming elections, voicing their opinion on a sensitive issue such as this, is a huge risk to take, since fear of losing out their vote bank exists. Thus, the situation remains a tense one, in the state of Tamil Nadu. Even today, the protests continue over the said practice. Though the ban remains intact, the implementation of the same remains a big question.

Consumption of bull meat is a punishable offence by religion but taming of one is a tradition to be practiced? There lies the pathetic fallacy which most Indians fail to recognize.