It was in March 2015 that two young girls, twins rather(who look nothing alike!), barely even teenagers, transformed their nag for baking into an idea for social change. Ex-students of Step by Step World School, Noida, Mahek and Muskaan have always had an innate love for baking. This was encouraged by their mother, Sonia Arora who is a practicing Pranic Healer, also involved with charitable organizations at the voluntary level.

What started as a love for baking, soon became an idea that not only transformed hundreds of lives of underprivileged and disease-struck children but, is now a voluntary movement that provides a healthy and accessible platform to thousands of other children who love to bake and want to use it to bring change in the society.

Share-a-Cake is a dedicated voluntary movement, founded by the mother-daughter trio, to provide healthy, nutritious and home-baked cakes. The whole team of Share-a-Cake bakes homemade cakes and not only provides these on a monthly basis but celebrates birthdays of these children, together with the doctors and nurses treating on them, in the premises of the hospital. To expand further upon this idea, Share-a-Cake has now diversified into bringing birthday gifts for the children and simply be a part of the celebration, in case one wishes to volunteer outside of the baking space. Evidently enough, the idea is not only limited to providing cakes but giving them joy, celebrating with them, singing songs and playing games, just as if it was a birthday party.

The team has now expanded to 35 regular volunteers that together, supply 40-50 cakes at least 4 to 5 times a month in hospitals across Delhi, some of them being- AIIMS, Kalavati Hospital, Home Away From Home, Safdarjung, Guru Teg Bahadur. Volunteers are from different parts of the city which adds to the variety of cakes and they are mentored by a group of mothers headed by Sonia Arora.

Proud mother of two and founder of Share-a-Cake, Sonia says, “There are these kids, that have barely eaten anything and just lay in bed all day because of the Chemotherapy and the drugs, and to see them celebrate their birthdays and eating healthy homemade cakes, is a sight that one can only know the joy of when experienced.” She adds, “Since these people, the patients and their families, come from states all over India and are already spending so much on the treatment and living in a city like Delhi can be a hole in the pocket, to think of this idea as a widespread one just adds to the pleasure of working towards it.”

Narrating an incident when they only started doing this, the girls describe how one little girl couldn’t stop thanking them and would come up to them every 5 minutes to give a tight little hug. Her mother was equally grateful on seeing her daughter eat, after all the Chemotherapy drugs that she consumed. This, for the team, was enough motivation to continue doing what they’re doing. 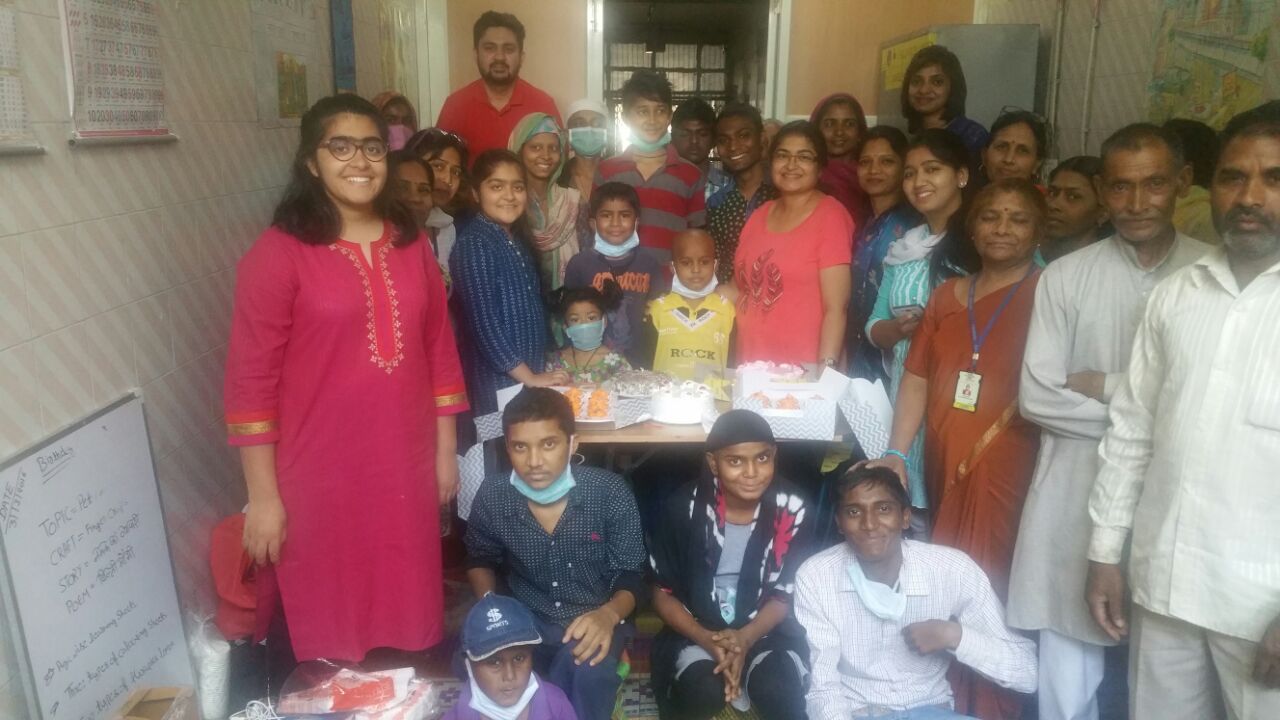 A simple idea, now a voluntary movement, simply goes to show how hobbies can become a catalyst for social change. It started small, when one day, the girls took a cake to an orphanage and it soon had 35 odd volunteers joining them which has helped this grow into a more organised form of social work based on a simple idea. While Share-a-Cake is a non-registered voluntary idea where they informally meet up and work towards the cause, each at the personal level, similar work involving hobbies is done by registered organizations such as Khel Khel Mein which is “working towards creating and establishing self-sustainable sports model in schools and communities.” Their “aim is to infuse enriching values like camaraderie, teamwork, perseverance, work ethics and mental strength in a child’s personality using sports as the medium” and “to create self-sustainable sports structures to promote experiential learning for children.” The KKM Foundation started in 2013 as a Teach for India Fellow-led initiative and is now working with 3000 children across 70 low-income schools.

Since most social workers seek to do tangible social work, what they do not realize is that, charity is not characterised by numbers or visible results. The aim of all work, especially in the Third/Voluntary Sector, is largely towards a greater goal which is the betterment of society through the actions of certain conscious individuals that want to give back to the society as much as they have taken. The idea that social work, which then leads to social change and further, the improvement in living conditions of the society at large, is what the essence of all charitable work is. The end product being betterment of the society. In this case, betterment through bringing joy and happiness in the lives of underprivileged children.

Interestingly, Bhutan, a country whose economy is known to be the smallest in the world, uses Gross National Happiness(GNH) as an economic indicator to judge the quality of its economy. Considering it’s a small country in South Asia that does not have to deal with issues of large developing countries-overpopulation, lack of political will towards socialism, corruption and the like, Bhutan’s indigenous ‘Happiness’ method should, nevertheless, be seen as promoting social change in small numbers. Start small and grow big.