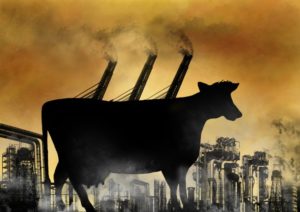 A research was conducted recently, regarding methane gas emission and how much India is responsible for its emission  in certain time span. The study used a combination of Satellite, Aircraft and Surface observations to find out the actual amount of methane emissions from India between 2010 and 2015.

The average emissions over the period were found to be similar to what India has officially reported to United Nations Framework Convention on Climate Change (UNFCCC).

Ruminants and herbivorous animals such as cows, buffaloes, waste and fossil fuels were found equally contributing in methane emissions.

Methane is the second most potent greenhouse gas after carbon dioxide. In contrast carbon dioxide which stays for about 100 years in atmosphere, methane has much higher intensity to contribute to global warming.

A communication barrier of birds!!