Every year World Sea Turtle Day is on June 16, which is a day to honor and highlight the importance of sea turtles. These creatures, like any other creature, are magnificent in their own way. Not only are sea turtles beautiful animals, but they also show incredible perseverance and resiliency– after all, they have been nesting on beaches for millions of years. 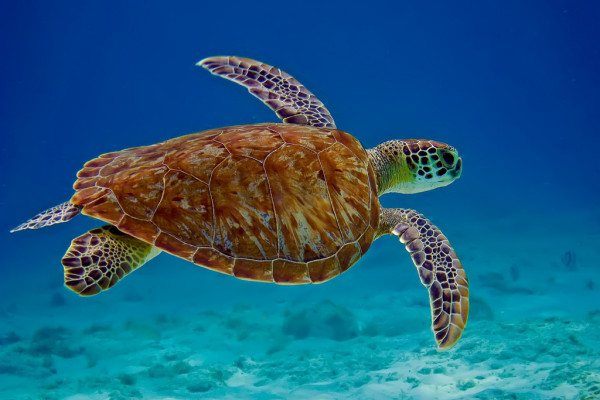 This year on World Sea Turtle Day, World Wildlife Fund (WWF) globally has called on the European Union (EU) for immediately taking action to protect marine turtles by requiring that all tropical shrimp trawlers exporting into the EU implement TEDs. According to the Food and Agriculture Organization of the United Nations (FAO), bycatch poses the single most serious threat to marine turtles worldwide. Marine turtles play a key role in marine ecosystems by, among other things, maintaining the health of sea grasses and coral reefs. In-fact, marine turtles have slow growth rates and are highly vulnerable to anthropogenic impacts, which are caused by commercial fishing, consumption, trade and climate change.

A report launched by WWF reveals that tens of thousands of marine turtles are killed each year during trawling for shrimps.A simple solution to the problem is the use of TEDs (Turtle Excluder Devices) in the trawl nets.  TED is a grid that fits into the narrow neck of a trawl net and the angle of the grid are designed so as to divert marine turtles.

Some of the advantages of using TEDs are-

The use of TEDs has proven to have reduced turtle bycatch by up to 97% with minimal shrimp catch loss.

India is one of the largest exporters of shrimps, mainly; to US and EU markets with approximately 46% of shrimps being wild caught. India is also home to the largest mass nesting olive ridley turtle population which is threatened by shrimp trawling without TEDs.

The government of India has been facilitating the installation of TEDs in shrimp trawl boats through CIFT (Central Institute of Fisheries Technology), and the state government of Odisha has made it mandatory for all trawlers to use TEDs. However implementation of these regulations is still a concern and needs to be strengthened.

“Marine turtles represent a vital natural heritage for India and the country should do all it can to protect turtles from critical threats such as bycatch, loss of nesting habitat, and climate change. Transforming the shrimp industry towards sustainability, including the use of Turtle Excluder Devices is a critical way forward”. – Dr. Sejal Worah, Programme Director, WWF-India

WWF highlights that the future of many of the world’s marine turtle populations rests on reforming the tropical shrimp production system across the value chain.  A shift in global consciousness on the consumption of shrimp from fisheries implicated in marine turtle bycatch is essential.

WWF is calling upon all actors, from the tropical shrimp fisheries right up to national governments, and the European Commission, to demonstrate their commitment to helping secure a permanent place for sea turtles in the global marine ecosystem.