An international day for Yoga was declared unanimously by the United Nations General Assembly (UNGA) on 11 December 2014. The Indian Prime Minister Narendra Modi, in his UN address formally suggested the date to be June 21, it being the longest day of the year. 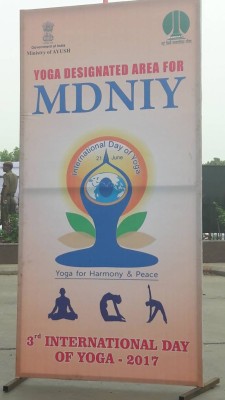 The purpose of International Yoga Day is to promote Yoga, an endeavor towards making it a part and parcel of everyone’s daily routine. The benefits of a yogic routine are countless, hence, “motivating your loved ones to practice Yoga is a must on this International Yoga Day”, says the official statement by the government.

“Yoga is an invaluable gift of India’s ancient tradition. It embodies the unity of mind and body; thought and action; restraint and fulfillment; harmony between man and nature; a holistic approach to health and well-being. It is not about exercise but to discover the sense of oneness with yourself, the world and nature. By changing our lifestyle and creating consciousness, it can help in bettering our well-being. Let us work towards adopting a routine that includes Yoga.”, declared Prime Minister Narendra Modi.

President Pranab Mukherjee inaugurated a mass Yoga demonstration to commemorate the 3rd International Yoga Day at Rashtrapati Bhavan yesterday. President Pranab Mukherjee told a gathering of enthusiastic children, youths and elderly people at Rashtrapati Bhawan, “Regular practice of Yoga will not only help you to build a fit body and a sound mind, but it will also take care of all disorders -mental and otherwise.”

Morarji Desai National Institute of Yoga actively participated in International Day of Yoga on June 21.  The institute played a pivotal role in making the event a grand success.  Common Yoga Protocol and Yoga DVD for IDY were prepared by the Institute in consultation with the eminent Yoga Experts and the officials of various Ministries, Govt. of India.

Indian Naval Cadets perform Yoga on the deck of INS Virat on International Yoga Day in Mumbai, Maharashtra. Large scale Yoga sessions have people across India bending and twisting into various poses on International Day of Yo

Prime Minister Modi sets an example by practicing Yoga on the occasion of the 3rd International Yoga Day celebrated on the 21st June.

Yoga, with its power, assists in building a control over mind and soul. It absolutely furnishes us from all disease. It’s great that different organizations and the government are supervising the importance of Yoga. On the occasion of Yoga Day, around 45 lakh people have pledged to make Yoga an integral part of their daily life. 100 Yoga parks have been planned scheduled to be open within a year across the country. Also 62,000 people have participated in separate events across Delhi, despite of the rainy weather.