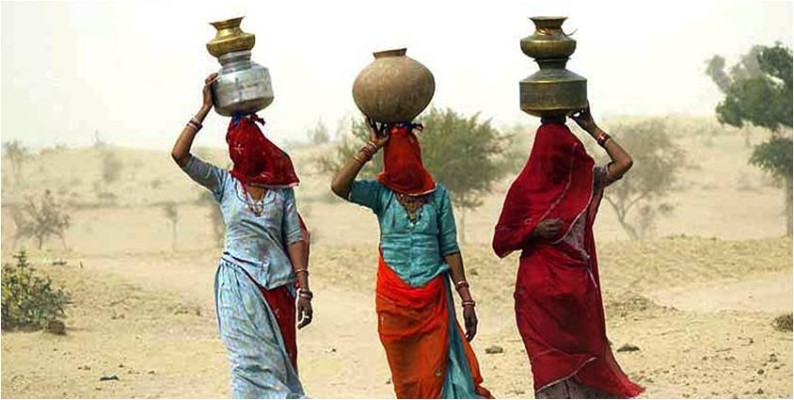 India is witnessing large scale commercialization of water in the 21st century. The stress on multiple water resources is a result of a multiple factors. Factors such as ever increasing population and radical shift in lifestyles have increased the need for freshwater while intense competition among consumers of water in agriculture, industry and domestic sector are pushing the ground water table deeper resulting in extreme situations of helplessness.

Women and children being the vulnerable part of society then, become the medium of fulfillment of the water needs and to do so, they are required to walk miles.

Studies prove that every second woman in rural India walked an average of 173 kms to fetch potable water in 2012 making her trek 25 km longer than what it was in 2008-09. According to NASSO statistics, in 2012, about 54 percent of women had to travel between 200 meters and 5 km daily to get drinking water. They walked 20 minutes on an average and spent another 15 minutes at this source. NASSO statistics also state that every second rural woman was spending 210 hours in a year to fetch water. 70 percent of the rural women from the states such as Chhattisgarh, Odisha & Jharkhand need to walk this much to draw water.

About 80 percent of the country’s drinking water needs are met by groundwater which is highly contaminated. In rural areas of Rajasthan, women and girl children bear the responsibility of collecting, transporting, storing and managing water.

Varsha Deshpande, a lawyer & women’s rights activists said, “Women are the most vulnerable, She is the first to wake up, she walks the farthest to fetch water, she eats last and probably the least and she sleeps last. This takes a toll on her health, her reproductive cycle.”

It is common for girls in rural India to drop out of school so as to help the mother to carry out the burden of moving water. Eventually, they miss their classes and lag behind in school, enough to abandon their education. It was only in 1949 after the recommendation of an environmental hygiene committee that safe water be supplied to an ambitious 90% of the country’s population within 40 years did the government step up in action. It still remains a far-fetched reality as Dr.Vandana Shiva, a noted environmentalist reports that on average, “a rural Indian woman traverses 14,000 km a year just to fetch water.”

Earlier last year, Maharashtra faced the worst droughts in over four decades when the situation had worsened to a point where the Centre had to send in trains of water to the Latur district. A Business Standard article reports how women have had to wake up at 6 am in the morning, sometimes even at midnight and set out in search of water. As evidence of the gravity of the situation, Government schools were being shut early just so that children, especially the girls, too could pitch in.

With such extreme levels of water crisis taking over the rural women, not only are they burdened with domestic work but also sourcing something as essential as water for basic human existence. This, therefore, throws light on the growing gender disparity deep rooted in rural patriarchal India that the political community fails to address.