Recently, a case of cow smuggling was reported where in three men were suspected to be involved.Although after the investigation, those men were found to be innocent and were transporting the buffaloes to Ghazipur Mandi but still there are many cattle trafficking cases witnessed. While the government is working on the solutions for these kinds of cases, an Ngo Love4cow Trust is working to propagate and promote love for cow and make Love4Cow a people’s movement. Their mission is to propagate and to promote virtues of cow and its traditional place in Indian culture and economy. 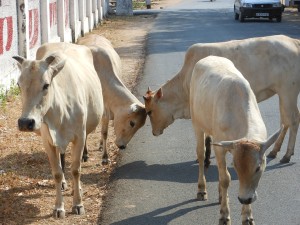 Mr. S.K. Swami, founder of the trust says, “India is a country where cows are being worshiped, reason being that the composition of the cow milk is nearest to the composition of human mother milk”. He also explains the importance of Indian cows, as they have 15 different carbon compounds in their milk as compared to foreign cow milk.

The NGO is working from past 15 years for-

Love4cow Trust has even launched, “Save the Cow campaign for Total Food Security” and this awareness campaign is to save the cow for the Next ‘Green’ and also for’White’Revolution. The campaign revolves around the idea that-

Apart from this, there are organisations such as People for Animals, Circle for Animal Lovers and many more, working for animal welfare and helping in the decrease of animal exploitation cases.