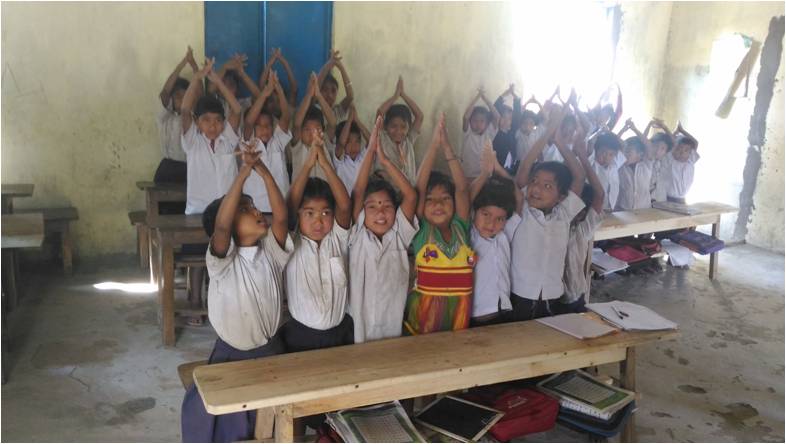 Each year Assam witnesses flood as monsoon sets in. Likewise, this year too Lakhimpur district was badly affected by flood when the water from river Subansari overflow due to breached of embankment. The entire village of Alichiga Patnawala as well as the neighboring villages were affected and submerged by the flood water forcing the people to leave their homes and take shelter in open space on high lands or roads. The water level in the area was as high as seven foot. Agricultural land, crops, roads and houses were damaged and livestock both big and small were washed away or survive with great difficulties. Movements are restricted due to surging water and the stocked food items are drenched by the flood water resulting in shortage of food. This misfortune is common in Assam to many communities like that of Lakhimpur and Dhemaji district. Situation like this happen every monsoon and the villages in the area remains waterlogged for 4-5 months. Boat becomes the only means of communication during calamity.

The flood affected victims commonly faced diverse challenges during flood wherein almost all people do not have access to basic amities like drinking water since most of the drinking water sources are inundated; toilets become inaccessible, all means of communication cut off and shortage of foods among many. Open defecation is another issue resulting in different health hazard especially among children and women. Due to inaccessibility of drinkable water the people are directly consuming river water contributing to various health concerns among the community such as cholera, fever, diarrhea, jaundice and other skin related issues.

Indo-Global Social Service Society (IGSSS) has been part and partial of the community in Lakhimpur district since 2012 in responding, organizing, capacitating and enabling resilient abilities towards flood. IGSSS bringing in together the experiences of working in the flood prone area has been promoting flood resilient shelter, High Raised Platform, Raised toilet, raised hand-pumps and country boat including Water, Sanitation and Health (WASH).

WASH is one such component among many which the organization gives significance while implementing DRR projects. Striving to promote a community adaptable to flood or any disaster and minimizing the risk of health issues IGSSS incorporate WASH initiative while encouraging the community to adopt good hygiene practices. In order to address issues of open defecation and lack of drinking water relating to community health, IGSSS promote assets including raised toilet to minimize or eliminate open defecation and hand-pump in a raised platform for the community to access safe drinking water as flood durable assets. IGSSS also supported water-filter to access safe drinking water during flood. “The water-filter is the best thing that we have received till date”, remarks Mr. Deboraj Doley (27), a residence of the village, Legeraimukh Chanong.  He hoped that the filter will help the community consume pure water hence reducing the outbreak of a number of disease accounting from intake of contaminated water. Disaster Risk Reduction activities includes sensitization, imparting of knowledge especially school children on good hygiene practices.  There are visible gradual behavioral changes among the community as they started using toilet which was never practice before in the area. The toilet supported and constructed by IGSSS is now use by village community. Through school level hygiene promotion children are now convincing parents for construction of household toilet.

Some of the children in the community are now becoming a change agent and ambassador to reach out to the larger population. A girl named Puja Halder (12) from Alichiga Patnawala village have written an open letter to her parent asking for toilet while stating the ill effects of open defecation. Replying to the question why she wrote the letter, she said “After the school safety and awareness program I understood the importance of hygiene practices and felt responsible for the safety of my friends, family and community”. On the other hand Village Disaster Management Committee (DRMC), an institution promoted by IGSSS understanding the need of toilet is now applying for construction of low cost sanitary community toilet from the government department under the Swatch Bharat Abhiyan scheme.